I have a confession to make…I’m a William groupie (no, not the singer from Black Eyed Peas fame, but rather the original creative genius from the Victorian age…William Morris that is). Call me old fashioned, but nothing like the sight of intricately woven textiles and decadent floral motif wallpaper busting forth with color get me into an art-fueled tizzy!

An avid fan of Morris and his merry band of medieval revivalists (also infamously known for their philandering – Art Fund has recently created a delightful matrix of the incessant bed hopping within the Pre-Raphaelite set), revolutionized the arts, and remain relevant today. As leaders (Morris, Dante Gabriel Rossetti, Edward Burne-Jones to name a few), who spearheaded the Arts and Crafts movement, no one like the Pre-Raphaelite brotherhood impacted every corner of the arts quite like this defiant brigade, from painting to furniture to architecture…and perhaps no one ever will. The crux of this particular artistic and creative movement went beyond stylistic connotations, it was a philosophy. As the industrial revolution grabbed hold, Victorian Britain fell under the spell of these technological advancements, Morris’s Arts and Crafts is a reaction against this. An anti-industrialist movement (emerging from 1860 until the early 20th century – late Victorian age), Morris & Co. explored the beauty of the man-made; the essence of the craftsman; the process and the labors of love in achieving the zenith of a lasting piece of art that is cherished for a lifetime and beyond. Morris and his crew, drew upon medieval and gothic design motifs, as well as literature (such as the Canterbury Tales) as inspiration, believing in quality over quantity. Drawing an interesting parallel to today’s art market, Arts and Crafts movement pieces were only available to the ultra rich (sound familiar, the one percent of the one percent?). A wealthy landowner in England who can afford such elaborate pieces, in which hours upon hours have been spent carving and crafting to painstakingly create such lovely works of art, igniting a debate that has existed for centuries: only the wealthy have access to the upper rungs of cultural and artistic sophistication. Hence, Morris, a staunch socialist, had strong views on “sharing” art, not purely for an elite class (rather ironically). I include a link to an insightful podcast at the end of this blog by BBC Arts & Ideas that does discuss this a bit more at length, amongst other interesting details about the Pre-Raphaelites.

Here are a few of my favorite pieces (an Arts and Crafts movement sampler!) – even to contemporary eyes, can be appreciated for their beauty and detail: 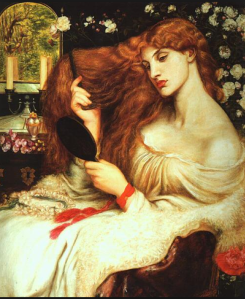 Recently, over the last couple of years, major museums and curators have taken a renewed interest in Morris and his contemporaries with a wealth of wonderful current and upcoming exhibitions (no doubt, led by the NGA in DC’s joint venture with the Tate Britain, “The Pre-Raphaelites: Victorian Art & Design” in 2013) . No longer the decorator of choice of the frumps, William Morris is hip and coming to your neighborhood! Each show, reflects Morris’s impact upon design, influencing future generations, and promoting an interest in materials, fabrics, and artistic processes – that still hold true today, one hundred years later.

The MET’s “The Pre-Raphaelite Legacy: British Art & Design” (closing this Saturday, Oct 26th) – provides the perfect overview of William Morris and his disciples’ work, in a user-friendly, digestible manner.  Although exquisite, the endless layering of ornamentation of this style can be overwhelming (especially to untrained eyes and particularly for audiences with a taste for minimalistic works). Confined to one room, the show is a great snapshot of the type of work that belongs to the Arts and Crafts movement: painting, sculpture, stained glass, tapestries to name a few…

And, even in Canada one can find a sample of the Arts and Crafts movement at Toronto’s Royal Ontario Museum (ROM) “Around 1914: Design in a New Age” exhibition, where the movement inspired future styles both in Europe and abroad…even silverware and chairs from the period are on display.

In today’s technology and digitally-driven age, I think we all have a little William Morris in us, a craftsman (or woman!) waiting to burst forward. We can all take a page out of the Pre-Raphaelite mantra, turn off your phone, ipad, computer and TV – get your paintbrush, your sewing machine…whatever your creative arson of choice and just make something. Get in touch with that creative side! Holly knows art.